Recently, I had the opportunity to give a short presentation to a group of home schooled students in the North Country about women in the War of 1812. I thought I would share with you all a brief outline of my presentation to learn more about the women who served their country.

First it is important to remember the status of women at that time. Women did not have the same rights as men- they were expected to live and work at home and care for their families, and they did not have the same access to education as men. Women were not expected to work outside the home, and if they did it was a supplemental income for their families usually doing domestic duties like sewing.

The evidence that is left behind by women is more from the upper class. These are the women whose husbands were higher up in the armed forces and held prestige. These were the women who could read and write from the upper class. Other women who were of the lower class would not be able to read and write and leave behind primary sources for us to learn from. These lower class women were the camp followers, the laundresses and servants to the soldiers.

Women were not allowed to join the armed forces or to fight in battle.Women were only able to join the military after the Women’s Armed Services Integration Act was signed by President Truman on June 12, 1948.

Women had their own roles during the War of 1812.



Some women were on the battlefields, others at the camps. Even more women stayed at home to manage the home, and to pick up the slack of the men off at war. There are not many accounts of camp followers on the American side, but they were definitely there on the British side.
Women would help deliver water to men in the battlefield.

At camp, women were laundresses, seamstresses and companions to the soldiers.

At forts and garrisons, women worked as servants, cooks, nursemaids, and laundresses.

Some wives accompanied the soldiers. However, there was a lottery at times to decide how many wives were able to go with their husbands during these battle campaigns. The number was even as low as 6 wives per 100 soldiers. Other women who were there were employed as laundress or servants, and still looked after their families when they worked.

Lydia B. Bacon was the wife of Lieutenant and Quartermaster Josiah Bacon who served during the War of 1812.
 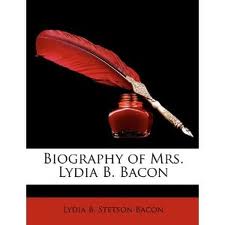 
Mrs. Bacon traveled with her husband, and her journals leave an important story of women in the war that is often forgotten.

The journals provide another perspective of camp life,  covering the smallest details from weather to her travels. Most importantly, it highlights how many women were proud to serve their country.
From August 2nd, 1811 Bacon writes: “…tents are pitched on the side of the river, & fires made for the Soldiers to prepare their suppers, plenty of business going on–Mrs A is making up her Husbands bed, & reprimanding Mrs. G. who being a little offended will not do the same for hers. I wish you could take a peep at us.”

”Altho I wish much to see you yet as my husband was obliged to come, I never have for a moment regretted accompanying him, It is a great source of happiness that we can be together, & I have the satisfaction of knowing I am performing my duty.”
Heroines of the War of 1812
Dolley Madison was the wife of President James Madison.



In 1814, the Whitehouse was attacked by the British. President Madison was in Maryland assessing the situation, while Dolley was left at the Whitehouse with only a few faithful servants.

Thanks to Dolley, the portrait of George Washington, and a copy of the Declaration of Independence were saved from destruction when the British destroyed the Whitehouse.

Laura Secord is famous in Canada as a name for chocolates, sweets and ice cream.


What many do not know, is that Secord was a heroine during the War of 1812.

Secord’s husband served in the British Army. Once Secord heard he was wounded at the Battle of Queenston Heights, she left for the battlefield.
After the Battle of Queenston Heights n 1813, Americans occupied the Canadian side of the Niagara River. All able-bodied men were sent to the American side as prisoners of war.

Because Secord’s husband was wounded, the Secords were spared. However, the Secords had to host American soldiers in their home.

When Colonel Boerstler, head of the forces at Queenston Heights, was at the Secord’s home, he revealed plans to attack the British at Beaver Dams. Secord then walked for 18 hours to warn the British troops.
It was not until 1860, when Secord was 85, was she rewarded for heroism by the British government.


Here is an excerpt from her speech to the Prince of Wales,  “Here [Beaver Dam] I found all the Indians encamped; by moonlight the scene was terrifying…Upon advancing to the Indians they all rose, and, with some yells, said “Woman,” which made me tremble…I was determined to persevere. I went up to one of the chiefs, made him understand that I had great news for Capt. Fitzgibbon, and that he must let me pass to his camp, or that he and his party would be all taken. The chief at first objected to let me pass, but finally consented, after some hesitation… I then told him [Capt. Fitzgibbon] what I had come for…that the Americans intended to make an attack upon the troops under his command, and would, from their superior numbers, capture them all. Benefiting by this information Capt. Fitzgibbon formed his plan accordingly, and captured about five hundred American infantry, about fifty mounted dragoons, and a fieldpiece or two was taken from the enemy.”
Women of Plattsburgh
The Delord family moved from the Peru Quaker Union to Plattsburgh in 1811.



The British occupied the Delord home during Murray’s Raid in 1813, and during the Battle of Plattsburgh in 1814.



Before the British arrived in Plattsburgh, Betsey buried the family silver in the backyard so it was not looted. What possession would you save if the British were coming?
Sources:
Galafilm. “Women and War.” Accessed October 27, 2012. http://www.galafilm.com/1812/e/people/ womenatwar.html.

Upper Mississippi Brigade. “The Role Women Played in the War of 1812.” Accessed October 27, 2012. http://umbrigade.tripod.com/articles/women.html.